The members of my writer’s group are under the impression that I have a following.

That’s very sweet of them to think that, but it’s really not all that big.

Unless you’re one of the lucky few who are “overnight successes,” it takes years to build an audience. I put quote marks around that because even so-called overnight successes usually work at it for a while before they make it big. What I’m talking about when I say overnight success is when someone releases something (which could have taken them years and years to accomplish) and they get an immediate huge following.

Anyway, I’m nowhere near that. I’ve been working the last few years on building my audience and it’s slow progress. A lot of work goes into building an audience: blogging, Facebooking, Tweeting, attending and/or speaking/presenting to conferences, readings, and other events, doing interviews and online chats, and writing. Lots and lots of writing. Taking on other projects gets your name out there, too. Volunteering at a conference or other event gets you known in those circles, as does editing work.

As this year starts winding down, I’m feeling the disappointment of not having accomplished all that I wanted to, but I’m also proud of all that I have accomplished. I co-edited All You Can Eat and Unwrap These Presents (which I’m told will be available in late October). I co-wrote, along with my writer’s group cohorts, Hunger: Stories of Desire, Discovery, and Dissatisfaction, and contributed a story to Wicked Things, which will also be out in October. 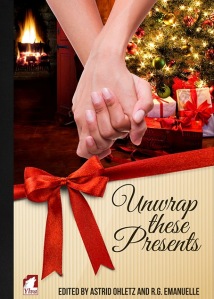 The disappointment part comes from the fact that I spent about 8 months writing and revising a novella, which was to be the first in a series, only to come to the conclusion that it’s riddled with problems and I will probably have to start from scratch. It’s heartbreaking to realize that something that you’ve worked so hard on doesn’t work. It’s like having a child for whom you’ve sacrificed and given everything to, and then they decide to hold up a liquor store and go to prison for a few years.

You wonder, what did I do wrong? What could I have done to prevent this? The answer, of course, is probably nothing. As long as you didn’t abuse or neglect them in some way, they chose their own path to take.

The whole thing has been so devastating for me that I’ve been unable to write anything for a several weeks now. I feel paralyzed, unable to even think about the next book, chapter, scene, or even sentence. Work on book two in the series came to a screeching halt, and I sometimes have doubts that I will be able to pick up the novella and work on it ever again.

The only thing you can do as the parent of a child who’s gone astray is to try and set them on a better path. That’s what I’m going to try and do. It hurts because I care for my child—I love its quirks and personality and I don’t really want to change it. But I have to. It makes me kind of nervous to say that because many homophobic parents would use that argument to put their gay kinds in a conversion camp, but then, I’m not really talking about a human being, am I?

This is not going to happen before the end of the year. I’d been hoping that I would get it out in October; now it looks like it won’t be until next spring, if I’m lucky. In the meantime, I’ll keep doing other things. Hopefully, I’ll get some more readers interested in my work and those who already are will come find me in the spring.

One thought on “Into the Next”