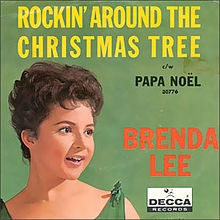 continuously, year after year, for decades? I mean, radio stations still regularly play “Here Comes Santa Claus” by Gene Autry, “Have a Holly Jolly Christmas” by Burl Ives, “Rockin’ Around the Christmas Tree” by Brenda Lee, and “Have Yourself a Merry Little Christmas” by Frank Sinatra, released in 1947, 1965, 1958, and 1957, respectively.

People still listen to these songs, some of which are in the 70-year range, every year as if they are fresh and new. They are aired by pop radio stations, get played at parties, and are piped in at malls and in elevators.

What other music can say that?

Yes, you will catch the Beatles on your elevator ride, tap your toe to “The Girl from Ipanema” while waiting to be called in at the dentist’s office, or hear the chords of “Everybody Have Fun Tonight” while shopping at Walmart. And, of course, there are stations that are devoted to “oldies” or a specific type of music that, by virtue of the genre, will play older music. (For example, no self-respecting jazz station will omit playing Ella Fitzgerald, whose most famous recordings were done in the 1930s─1950s.) Occasionally, if you’re lucky, you might get to dance to a classic ’70s disco song at a club or party.

But for the most part, older music is treated as such—classics to be listened to either with reverence or nostalgia, and usually by those old enough to remember it when it first came out. So much music gets forgotten in mere months after their release. Look what happened with U2 a few months ago when iTunes automatically downloaded their latest album onto people’s playlists. People younger than 30 were like, “Who’s U2?” O_O

I mean, holy shit. U2 is only one of the greatest rock bands of all time (okay, I’m sure some of you would argue with me about that, but let’s just go with it for now). But the music scene is fickle. Very, very fickle. It goes through a midlife crisis basically all the time, like one long, continuous identity crisis.

But I’d be willing to bet that many of those same people who asked, “U2 who?” have heard “Jingle Bell Rock,” recorded by Bobby Helms in 1958, or the Hall and Oates version from 1983, at some time or another. If for no other reason, these songs continue to be used time and time again in holiday movies, which is a film category that seems to have the vampire’s life—it will never die. Yes, they use newer music, too, but they’ll slip in an oldie here or there. And since some pop stations play 24 hours of holiday music throughout December, starting right after Thanksgiving, it’s impossible to avoid entirely.

I just wonder how long we will be listening to these decades-old holiday tunes. Will we still be toasting with eggnog at the office party to the notes of “I’ll Have a Blue Christmas” by Elvis Presley in 20 years? Fifty? A hundred? Beyond?

All this means absolutely nothing. I just find the idiosyncrasies of pop culture and society’s traditions fascinating. It amazes me how some traditions remain for centuries, even millennia. The tradition of the Christmas tree, as we know it today, began in the 16th century; mistletoe was hung for kissing beginning in the 18th century; and caroling began as a celebratory rite for the winter solstice thousands of years ago.

How will recorded music—specifically, Christmas music—stand the test of time?

We’ll never know. But holiday music comes in all different forms, and even the most cynical of us can enjoy some, whether it’s the heartfelt, sitting-by-the-fireside crooning of “Baby It’s Cold Outside,” the sad wartime diddy “I’ll be home for Christmas,” the nostalgic “The Chimpmunk Song,” the fun and light “Santa Baby,” the silly “Grandama Got Run Over By a Reindeer,” or the anti-Christmas “Father Christmas” by the Kinks. Whatever floats your boat.