This is for all the control freaks out there.

Two familiar sayings: You are the captain of your own ship. You are the master of your destiny.

Do you really believe that?

I’ve spent my entire adult life trying to construct the building blocks that I felt should be the foundation of my life. And if anyone has been reading my blog or Facebook posts, you’ll know that part of that is chasing the kind of job that I really want by doing everything in my power to build my resume, which includes flipping cartwheels and pulling rabbits out of my ass.

But it finally dawned on me—control is an illusion. We can do a million things to create a result that we want, but in the end, that result is incumbent upon luck. 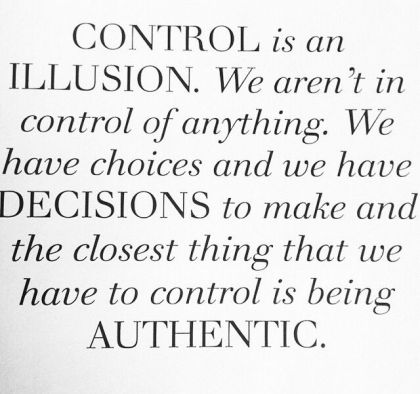 Now, some people might say “there’s no such thing as luck” or “you make your own luck.” But let’s look at an example. Let’s take two actors. They start off in the same place in life, are equally talented, do the same kind of training, and try out for many of the same parts. One actor goes on to be a huge Hollywood star, while the other never gets more than a few bit parts. Here you will say, well, maybe the first actor worked harder, or had that extra little spark, or an important casting director saw something in him.

Another example: Two people apply for the same job. Equally educated, equally experienced, same social/political/professional profile. Why does one get the job over the other? Again, you’ll say that the one who gets the job has that little extra something.

Or maybe it’s that the there really wasn’t much difference between the actors, but the first actor was lucky enough to encounter a casting director who makes and breaks careers, while the other actor never got such an opportunity.

Maybe the hiring manager at the job turned out to be a friend of a friend who the winning applicant met at a wedding. The other person was just as qualified, but not as lucky to have a personal connection with the manager.

Call it luck. Call it destiny. Call it the whim of the Universe or God or whatever you believe in. It all comes back around to the same thing: we have no control.

Think about it. You can work like a dog at your job, but you can’t help it if your company goes bankrupt and has to lay you off.

You can bend over backwards to help someone, but you can’t force them to appreciate you.

You can take classes, do volunteer work, and get involved in events, but you can’t force an employer to hire you.

You can eat healthily, exercise daily, even live in an organic-only commune completely off the grid, but you can’t force your body to not get a disease.

Accepting that we have no control is a frightening thing. No one wants to believe that we have no control over anything in our lives. It goes against our very nature, our instinct to take command of the world. It’s scary, this not knowing what’s going to happen. Uncertainty is nerve wracking. But things will happen the way they happen, no matter what you do.

This is the reality that I’ve been forced to face. So now my goal has been to come to a place of acceptance. I’m learning, slowly, to accept that all I can do is try my best, but I cannot force the result I want. Stressing myself out about it and burning the candle at both ends (to the point that my mental and physical health are impacted) in the hope of reaching my goal is pointless. Mental and physical health are better served when you don’t completely exhaust all your resources trying to do something that refuses to get done.

Don’t misunderstand. This is not an acceptance of defeat. Rather, it’s accepting that there may be more than one door available to us. We’re so focused sometimes on a goal that we plow ahead full steam without really stopping to look around and assess what we have to our disposal. But if we stop the crazy for a moment, we might find there are alternatives. My therapist says, it’s making a left turn to move forward. The example she uses is this: It’s like trying to get into a room. You pound and pound on the door and it just won’t open. You’re so determined to get into that room that you don’t realize that there are other doors. That door won’t open, but maybe if you stop pounding on it, make a left turn, there’s another door there for you to try.

Learning to stop and take that left turn can be difficult. After all, we spend so much time in the pursuit of our goals that we don’t know how to stop. We aren’t aware that we can turn. Once we make that realization, the real challenge then becomes believing that one door will open where the other would not. Again, you have no control over which door will open. Not even slamming into it head first may open it. Believe me, I’ve tried. But trying each one might just get you into that room.

You’re a control freak, I get it. So am I. But letting go has been surprisingly freeing. Scary and frustrating, but freeing. It takes a heavy burden off your shoulders and allows you to believe, perhaps for the first time in your life, that you’re not a failure.

So Iet the illusion of control go, then sit down and rest. You deserve it.

8 thoughts on “Control is an Illusion”