On Saturday, January 21, 2017, I went to Washington, DC, to participate in the Women’s March on Washington. In the days that followed, people asked me how it went. So, let me tell you. 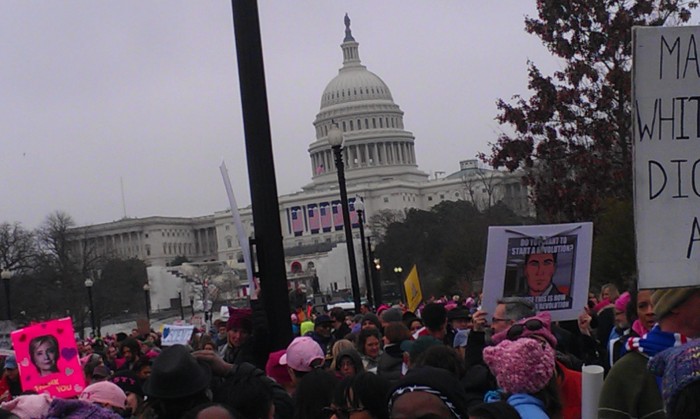 A friend and I managed to snag tickets on one of two buses organized/sponsored by Henrietta Hudson, a lesbian bar that’s been in Manhattan for decades (originally known as The Cubby Hole, for those of you who remember the Madonna/Sandra Bernhardt affair). My day began at 5 a.m., which may sound early to some of you but I know people who got up as early as 3 a.m. to make their way to group buses. And I met people who had been driving from various other states since the day before. Imagine that. This was such an important, momentous occasion that  people drove for up to two days just to be there. 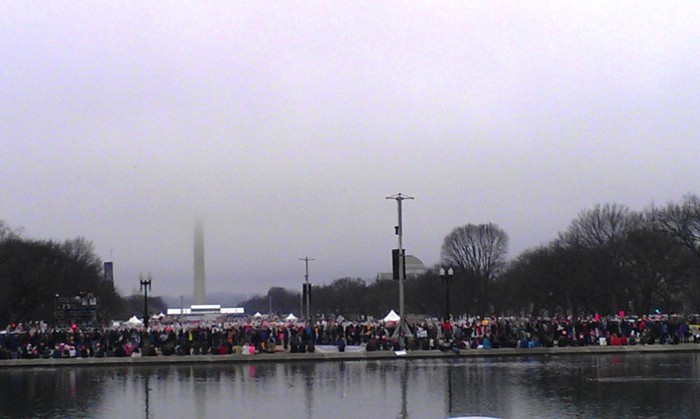 Anyway, I left my house at 5:30, drove to my friend’s neighborhood in Brooklyn, where I parked my car, and together we took the hour-long train ride into the city. Henrietta’s graciously had bagels and coffee and other breakfast items on offer before the long ride to DC. I’ve never been a big Dunkin’ Donuts coffee fan, but at 7 a.m., after what had already been a bit of a journey, it couldn’t have been more delicious. 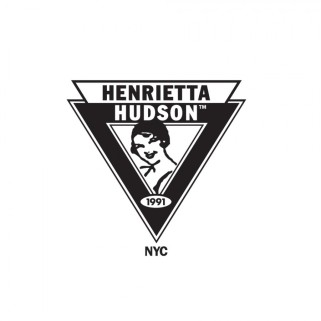 We hit the road promptly at 8 and arrived in D.C. around noon, which actually was too late to get a spot at the rally. We made our way to a gathering point across from the White House, where we waited for the march to begin. The weather was better than could be expected for DC in January—it was cloudy and foggy but except for a few drops, it never rained, and it was not freezing. Finally, after what seemed forever, a chant began rolling down the masses: March towards the Mall!

But before long, groups of people veered off into different directions. What was going on? My friend asked a couple of different police officers, who tried to be helpful in guiding us to streets that were our “best bet,” but they didn’t seem to know what the actual march route was. 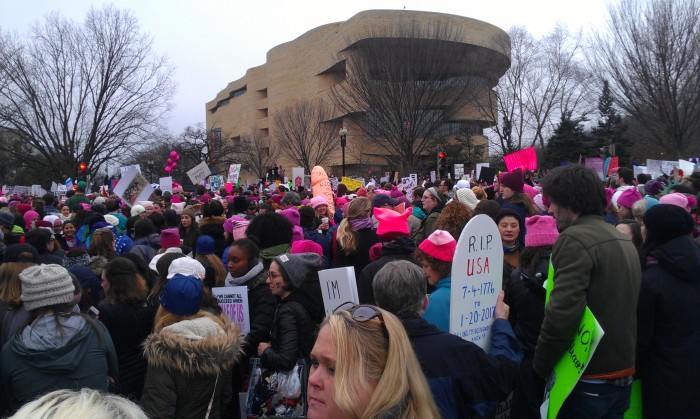 We tacked ourselves onto different groups of people going up different streets. We figured that everyone was headed towards the same place but were just taking different routes. All roads lead to Rome, right? But something wasn’t right. We kept trying to find the “official” route. We’d be marching along, see a group of people going down a different street, and say, “Hey, they look like they know where they’re going. Let’s follow them.” And we kept doing this again and again, until we’d covered practically the entire city and gone in a circle.

Then, at one point, in a particularly bustling street, we pulled off onto the sidewalk to take a breather and hook up our phones to portable chargers. We ended up in front of a restaurant and through the large windows, we saw a TV over the bar. The TV was showing marches around the country. And we were floored. I’d heard that there were going to be sister marches in various cities, but until that moment, I hadn’t realized the extent of this protest. My friend turned to me and said, with some awe, “We really are a part of history.”

Yes, we were. I turned around and looked at the people still marching down the street and was suddenly struck by the sight. The entire city had been taken over by marchers. Every single street we turned onto, there were protesters. I’d never seen anything like it, and I’m sure the citizens of DC never had either. Or the police officers or military personnel I saw on duty scattered here and there. Not that police or military was required at all—there were no incidences of violence or aggressive behavior, which is amazing in and of itself. In fact, the police and military were scarce and positioned mostly close to the White House and Capitol building. Maybe that was deliberate. Maybe they didn’t post a lot of police, figuring that violence would erupt, there’d be no cops to stop it, someone would get hurt or killed, and then Trump’s people could say, “See, these women are deranged and violent and don’t deserve any rights.” Well, if that was their intention, they got shit rubbed in their faces. The most negative thing the Trump administration people could say about the march was that women “trashed the city.” That was it. That was the best they could come up with. Ad it isn’t true anyway, but I digress. 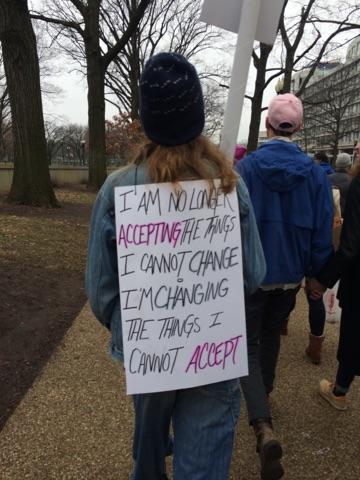 Late in the afternoon, we decided to continue marching but in the direction of Union Station, where we were to meet our bus and leave at 7 p.m. We were tired and a bit chilled. As if we had been guided there by an angel, we found one of the numerous safe spaces in the city for marchers: The National Museum for Women in the Arts. They had coffee and tea set up for marchers and a place to sit and rest. On our way out, I thanked the lovely ladies at the door for their hospitality. (At this point, I’d like to give a shout-out and props to all the places that offered their establishments as safe spaces. You rock!)

Our bus ride back was subdued but I knew that the feelings of accomplishment and rejuvenation rippled throughout the bus, even as people closed their eyes and went to sleep or slipped ear buds in and listened to soothing music.

The next day, I saw pictures of marches around the world, and it brought tears to my eyes. I couldn’t believe that all of these amazing women—and many men—all came together across the globe to make their voices heard. This was unprecedented and utterly humbling. Yet empowering. And it brought a little bit of hope—something that had taken a huge beating since Election Day, when it was announced that Donald Trump would be the next president of the United States. So many of us who had been dejected, demoralized, and feeling hopeless, suddenly didn’t. It’s estimated that approximately 3 million people participated worldwide. When that many people can come together around the world at the same time (or close to it) for the same cause, there’s something to that. There’s strength in that, and there’s no telling what can be done. 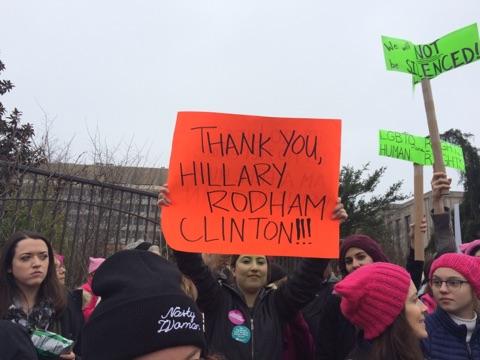 It was frustrating at first because we wanted to be part of the march proper. But when we learned the magnitude of the protest and that there were women marching in every major city in the U.S., I think we both felt the importance of what we were doing.

In the end, it was determined that this was the largest protest in U.S. history. And it hit me that what we had done was urgently necessary. It did 3 very important things. 1) It let the new administration know that we’re onto their crap and we won’t sit idly by and let them destroy lives without a good, hard fight. It let them know that we will not go back into the darkness, back into the closet, or back into an alley with a coat hanger. We demand respect as women, as immigrants, as workers, as non-white, as LGBTQ+, and as human beings.

2) It also let the entire world know that this Big Orange Man-Child does not represent the majority of us. He does not speak for us, and he does not take his own people’s best interests seriously.

3) It showed us that we are not alone in our stand on this big blue marble. Our sisters and brothers around the world are in solidarity with us. They stand with us for our rights, and they showed us the compassion and faith that our own president does not.

We all share the planet together, and rather than treat everyone as wanting “special rights,” our government should be acknowledging that we demand equal rights.

The photos from around the world are mind-boggling and I’ll always be proud of the event that took place. I only hope that we keep the momentum going.

One thought on “A March Into History”